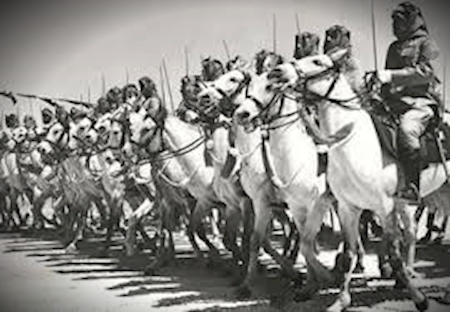 The morning of 10 June 1916 was a day marked in history books, embodying Arab determination to achieve their sought-after aspirations.

Before the dawn of this day, Sharif Hussein bin Ali fired the first shot to signal the start of the Great Arab Revolt against the rule of the Committee of Union and Progress, with the aim of achieving unity, liberty and a better life. The Revolt was about change and awakening as well as ending and erasing the results of four centuries of regression, decline and weakness in the spirit of the nation, signalling a restoration of the Arab spirit’s identity and sovereignty.

The Revolt led to the successful liberation of Hijaz, Transjordan, Palestine, Syria and Iraq, with the leadership of princes Ali, Abdullah, Faisal and Zeid, the sons of Sharif Hussein bin Ali (1916-1918). They had alongside them the free Arabs who joined the Revolt’s army.

The Great Arab Revolt’s operations between June 1916 and until the truce was signed on 30 October 1918 into three phases:

Second Phase: Covers the period from July 1917-1918, and can be referred to as the War in Transjordan.

Third Phase: Between September 1918-October 1918, and can be described as the completion of the liberation of Transjordan and Syria.

The Revolt’s armies were named based on the direction of their military operations, and began executing operations that targeted:

A- Castles and fortresses where Turkish forces were located.
B- Heading to Ajyad Fortress, the biggest centre of operations for Turkish forces in Mecca, and liberating it to become a military school.
C- Focusing on the railway, which extends over 1,301 km from Damascus and into Medina and represented a main artery for transport in the theatre of war in Syria, Transjordan and Hijaz for the following reasons:
1- The majority of Turkish forces, since 1914, had been grouped around the railway and its stations to safeguard supplies and ensure mobility.
2- The railway was the main artery for moving weapons, ammunition and soldiers at the time.
3- Many Arab communities had grown and developed around the railway, becoming full-fledged cities, such as: Mafraq, Jizah, Qatraneh, Hassa, Maan and Mudawara, thanks to the railway’s stations and the services exchanged between the residents and the Turks.

Sharif Hussein bin Ali was born in Istanbul in 1853, where his father and grandfather were staying at the time. His grandfather was then appointed as Emir of Hijaz, so he travelled with him to Mecca to studied. He also gained vast experience in his youth in the affairs of tribes.More...

King Ali bin Al Hussein was born in Mecca in 1880. He accompanied his father to Istanbul to stay there, returning later to Hijaz when his father Sharif Hussein became its Emir. He assisted his father in his responsibilities and deputised for him in his absence.More...

Prince Abdullah I ibn Al Hussein was born in Mecca on 4 April 1882, and studied there until his father was invited to stay in Istanbul. He continued his studies there, before returning with his father to Hijaz, where he was elected as a deputy for Mecca in the Ottoman Chamber of Deputies.More...

Prince Faisal bin Al Hussein was born in Mecca on 20 May 1883, where he received his elementary education, before continuing his studies in Istanbul and then returning to Hijaz with his father and siblings in 1908. In the following year, he was elected as a deputy for Jeddah in the Ottoman Chamber of Deputies.More...

Prince Zeid bin Al Hussein was born in Istanbul in 1898 during his father’s stay there. He returned to Hijaz, where he received his education. With the launch of the Arab Revolt in June 1916, Prince Zeid participated in leading the attack on Turkish posts in Mecca, and he helped fight back the Turkish troops that were threatening to march from Medina to Rabigh, and from there to Mecca.More...

The ceremony is held in Aqaba in reference to its history as the gateway of the Revolt into Jordan and the first Great Arab Revolt command centre on Jordan’s soil. The armies of the Revolt entered it with the support of Jordanian tribes in 1917, which helped achieve its goals of unity, freedom and awakening in the Arab Mashreq....